For the second chapter of RWBY: The Official Manga, see Chapter 2 (2018 manga).

The second chapter of the manga adaptation of RWBY was published in Shueisha's Ultra Jump January 2016 issue on December 19th, 2015.[1]

At the end of the previous chapter, Jaune Arc is sent flying by school bully Cardin Winchester and lands at Team RWBY's table in the Beacon Academy cafeteria. When Cardin begins antagonizing Ruby Rose, who stepped in to defend Jaune, Professor Glynda Goodwitch appears and turns the situation into an official sparring match.

The match is spectated by numerous students, as well as Professor Ozpin. Ruby nervously freezes up due to the large audience present and the size of The Executioner. As the fight begins, Ruby re-examines her reasons for wishing to become a Huntress, and remembers being saved from a pack of Beowolves by her uncle Qrow Branwen when she was just a child. With some encouragement from Weiss, Ruby easily defeats Cardin.

After the match, Ruby has a newfound confidence, and dons her signature red cloak along with her school uniform. Ozpin remarks to Glynda that the year to come will be a fun one. Elsewhere, Roman Torchwick is shown plotting.

This chapter also contains some expository narration that expounds on the purpose of Beacon Academy and the nature of Huntsmen and Huntresses. 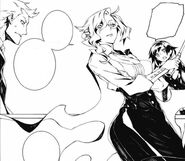 Ruby and Yang as children attacked by Grimm

Roman Torchwick
Add a photo to this gallery

Retrieved from "https://rwby.fandom.com/wiki/Chapter_2_(2015_manga)?oldid=1006564"
Community content is available under CC-BY-SA unless otherwise noted.