The nineteenth chapter was originally free on the Viz Media site until after the manga ended in June, the chapter was locked and is now only available for members of the site.

Meanwhile, Ruby Rose and Weiss Schnee continue to battle Roman Torchwick in Vale, who knocks Weiss into a pile of rubble, seemingly rendering her unconscious. As Ruby retaliates, Roman begins to taunt her for now being all alone, maniacally kicking her into the air. As Roman watches Ruby fall back down, he notices a glyph form underneath him, only to be thrown off his feet by Weiss, who had been saved by Blake and Yang. Roman realizes the Lieutenant and Neo have been defeated, and is quickly defeated by Ruby before he can do anything to escape.

In Beacon Academy, Ozpin and James Ironwood discuss the Breach, Roman's capture, and Team RWBY's involvement in their mission to Mountain Glenn.

After the battle, RWBY discuss Neo's escape and having never discovered who had been behind the infiltration at the Cross Continental Transmit System Tower. Team RWBY repeat their resolve to be heroes.

The Chapter 19 Japanese cover
Add a photo to this gallery

Yang continue her fight against Neo. 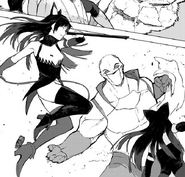 Ruby and Weiss fight against Roman.

Team JNPR, Sun and Neptune during the battle.

Ironwood discussed Ozpin about Team RWBY after the battle.

Roman gets captured by Atlas soldiers.

Team RWBY took a rest after their mission.
Add a photo to this gallery

Retrieved from "https://rwby.fandom.com/wiki/Chapter_19_(2018_manga)?oldid=1106753"
Community content is available under CC-BY-SA unless otherwise noted.