Roman Torchwick shatters after Ruby Rose's attack, revealing it to have been an illusion made by Neopolitan's Semblance. As she and the White Fang Lieutenant appear to assist the criminal, Roman threatens to kill her if she interferes with his fights again. Meanwhile, Ruby calls for her team to leave the Grimm to the others as they fight the trio.

Yang Xiao Long confronts Neo, who dodges all of her attacks with ease. She tries creating a smokescreen to launch a surprise attack only for it to be stopped by Hush. Blake Belladonna fights the Lieutenant who denounces her as a traitor for standing against them. As Ruby and Weiss Schnee battle Torchwick, Ruby tries convincing him to surrender. Despite a brief admission the situation has turned against him, the criminal refuses to give in and maniacally attacks her, declaring his intention to play his role of a villain. Ruby headbutts Roman in the nose, seemingly breaking it, and accepting that they'll still have to fight.

The Chapter 18 Japanese cover
Add a photo to this gallery 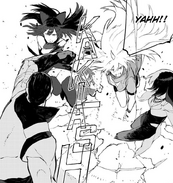 Blake and Yang versus Neo and White Fang Lieutenant. 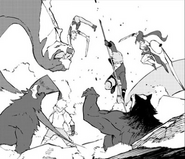 Jaune, Pyrrha, Sun and Neptune continues to fight the Grimm.

Ruby and Weiss versus Roman.

Ruby's resolve.
Add a photo to this gallery

Retrieved from "https://rwby.fandom.com/wiki/Chapter_18_(2018_manga)?oldid=1104884"
Community content is available under CC-BY-SA unless otherwise noted.