The sixteenth chapter was originally free on the Viz Media site until June 9th, 2020, the chapter was locked and is now only available for members of the site.

A bound and gagged Ruby is still tied to a chair at the mercy of White Fang members. Before they have a chance to do anything, the rest of Team RWBY arrives to rescue their leader. Ruby thanks them for the help, as Weiss expresses annoyance at Dr. Oobleck running off with Zwei and leaving the students on their own.

Roman Torchwick arrives with several more White Fang grunts, revealing a nearby train. Before proceeding to explain how they intend to attack downtown Vale. He brushes aside Yang's confusion by noting it is human mistreatment of Faunus that drove them to this point.

Ruby tells him to shut up, saying what matters is he plans on hurting people. The others step up to support her, agreeing their job is about protecting those in need. Torchwick responds by deploying several Paladins, as the girls prepare to fight. Oobleck appears having set many of the weapons on fire, while Zwei returns Crescent Rose to Ruby. He commends the team's attitude voicing certainty they will all be fine Huntresses, he then tells Roman not to underestimate Huntsmen as they get ready for battle.

The Chapter 16 Japanese cover
Add a photo to this gallery

Ruby at the mercy of the White Fang's hands.

Yang and the others saves Ruby from the White Fang. 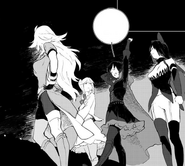 Ruby is relieved to see her team again. 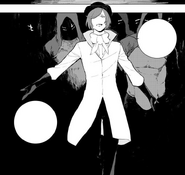 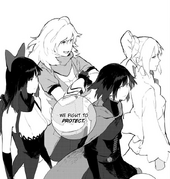 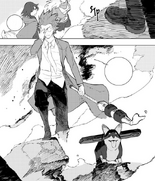 Oobleck congrats Team RWBY about the important of protecting the innocents.

Team RWBY and the others prepare to fight Roman and the White Fang.
Add a photo to this gallery

Retrieved from "https://rwby.fandom.com/wiki/Chapter_16_(2018_manga)?oldid=1104882"
Community content is available under CC-BY-SA unless otherwise noted.