The fifteenth chapter was originally free on the Viz Media site until May 12th, 2020, the chapter was locked and is now only available for members of the site.

The chapter covers are mixed and rearranged the second half of "Search and Destroy" and "Mountain Glenn", where Team RWBY fights a pack of Beowolves while Oobleck observes the ruins of Mountain Glenn. Afterwards, Oobleck asks Weiss, Blake, and Yang asks them their reasons for becoming Huntresses, but he is unsatisfied with their answers. He later talks to Ruby about Mountain Glenn.

In the middle of the night, Ruby searches for Zwei until she realizes her beloved pet has been captured by a White Fang member. As Ruby attempt to save him, another member catches her from behind. Ruby pleads with them to spare Zwei's life, but in exchange, she has to surrender and come with them. After Ruby regains consciousness, she finds herself in a dark cave with her hands tied up to a chair and her mouth taped shut. She unexpectedly encounters Roman, who mockingly greets her. Roman would love to have "entertain" with her, but he has other plans, so he decides to let the other White Fang members do whatever they want with her instead.

Meanwhile, Yang, Weiss, Blake, and Oobleck are searching for Ruby and Zwei in the abandon city until they find Zwei. Oobleck suspects the White Fang are hiding in a underground city of Mountain Glenn and captured Ruby. The chapter ends with Oobleck deciding to help Team RWBY and Zwei to search for Ruby and enters the hidden passage that leads to the underground city.

The Chapter 15 Japanese cover
Add a photo to this gallery

Oobleck asks Weiss, Blake, and Yang about the mission

Oobleck and Ruby look at the ruins of Mountain Glenn.

Ruby and Zwei gets surround by White Fang members. 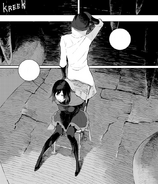 Ruby gets captured by Roman 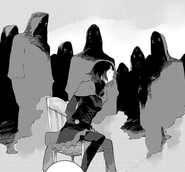 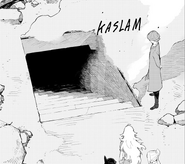 A hidden passage of Mountain Glenn. 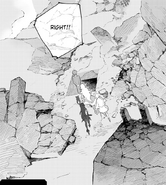 Weiss, Blake, Yang, Zwei and Oobleck continue their search for Ruby.
Add a photo to this gallery

Retrieved from "https://rwby.fandom.com/wiki/Chapter_15_(2018_manga)?oldid=1104881"
Community content is available under CC-BY-SA unless otherwise noted.