The fifteenth chapter and final chapter of Volume 1 of the manga adaptation of RWBY was published in Shueisha's Ultra Jump March 2017 issue on February 18th, 2017.[1]

Just outside Beacon Academy, Team RWBY reports in to Dr. Bartholomew Oobleck and Professor Peter Port, the former of whom becomes very worked up about missing out on observing a rare possession-type Grimm. Professor Port asks what it was like to work as a team, causing Weiss Schnee and Ruby Rose to argue about the necessity of flashy team attack names. Yang Xiao Long stops the argument and suggests that they get some food. She then gives Ruby encouragement, telling her that skill comes through experience and that she enjoyed the Bumblebee team attack. Ruby messes with the bandaged wound on her head, prompting Weiss to warn her that it will scar if she continues. In response, Ruby jokes that they will have matching scars that are mirror images, but Weiss does not take this with a sense of humor.

Ozpin watches Ruby from a distance and says that he cannot wait to see what becomes of her. While flexing The Disciplinarian, Glynda Goodwitch comments that she does not like the look in his eye and asks if she needs to remind him how a proper educator behaves. She proceeds to state that, one day, Team RWBY will fight a real battle. Ozpin replies that merely being alive is a battle and that they are all born with the will and potential to face that challenge head-on. He then states that the battle against the Grimm is a battle against the rejection of life and that it is his duty to lead the students into such battles. He finishes his speech by saying that, sometimes, he will be perceived as behaving improperly, but not for the reasons that people may think.

Elsewhere, Roman Torchwick is standing in front of a large, silhouetted vehicle. He remarks to himself that Ruby will learn how cunning adults can be. Meanwhile, as if sensing this remark, Ruby gets chills, prompting her teammates to joke that perhaps someone is holding a grudge against her.

Yang calls to Ruby to follow her, Weiss and Blake, and Ruby begins walking to catch up with her teammates. 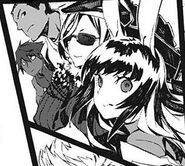 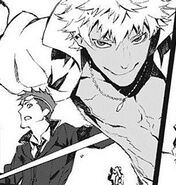 Adam Taurus and some Grimm 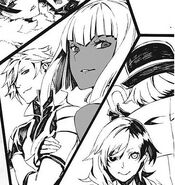 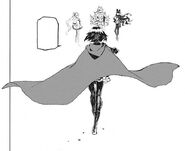 Retrieved from "https://rwby.fandom.com/wiki/Chapter_15_(2015_manga)?oldid=1083706"
Community content is available under CC-BY-SA unless otherwise noted.