The fourteenth chapter of the manga adaptation of RWBY was published in Shueisha's Ultra Jump February 2017 issue on January 19th, 2017.[1]

Somewhere in the area, Roman Torchwick is riding in a Bullhead piloted by a White Fang member, who worries about the Tentacle Grimm that escaped from the tunnel. Roman states that it is none of their concern and that their job is done now that they know that the tunnel is usable. He then offers the excuse that the City of Vale will soon be flooded with Grimm anyway. Suddenly, a pair of Floating Array's swords strike the Bullhead and explode, causing it to crash land. Penny Polendina is nearby, utilizing small plane wings to patrol a restricted airspace. She reports the presence of the Grimm that Team RWBY and Team JNPR are fighting, but someone on the other end of a wireless communication tells her that it is far enough away from Vale to be left alone.

Meanwhile, Ruby Rose calls for Blake Belladonna and Yang Xiao Long to utilize a Bumblebee team attack. Blake wraps Gambol Shroud's ribbon around one end of a King Taijitu to restrict its movement, while Yang unleashes a flurry of attacks on it with her Semblance. Yang's attack knocks the snake into another one that Nora Valkyrie and Lie Ren are fighting. Next, Ruby calls for a Checkmate team attack. Blake creates a pair of clones while Weiss Schnee makes two pairs of glyphs. One pair uses Dust to make the clones take on an ice element, while the other pair propels them forward. The clones leave a coating of ice upon impact with a King Taijitu, thus limiting its movement. Elsewhere on the battlefield, Jaune Arc is running with two King Taijitu heads tailing him. He calls out to Ruby and Pyrrha Nikos who open fire upon the snakes, while Jaune turns and runs between the two Grimm while frantically slashing at them with his sword.

Suddenly, Ruby leaps between Weiss and an attacking King Taijitu, taking a strike to her head in the process. She then brushes off Yang and Weiss' concern and says that she needs Weiss' help to increase the velocity of Crescent Rose's muzzle so that its bullets can pierce the Tentacle Grimm's hide. As the two prepare their attack, Ruby states that Team RWBY is, always has been and always will be the best team, with which Weiss agrees. After calling out "Ice Flower", Ruby fires a bullet directly into the Tentacle Grimm's mask, breaking half of it off. The King Taijitus begin crying out and squirming as if in pain, and Ruby gives the order to take them down.

Ruby begins narrating about how she wants to be a Huntress and why. With a memory of herself reading a book as a child, she explains that she loves stories about Huntsmen and how they use their skills to help people. With a flashback of Yang attempting to shield her from a Beowolf as a child, she states that Yang is a hero of hers. Following this is a flashback of Qrow Branwen, with him commenting that the desire to become a Huntress must run in the family, followed by him telling her to go for it.

Ozpin, Glynda Goodwitch and Cardin Winchester watch from a distance while Teams RWBY and JNPR charge in. Ozpin jokingly asks if Glynda thinks they need help, to which she responds that they will be fine. Team RWBY is shown diving in to finish off the King Taijitus, and the Tentacle Grimm is finally destroyed.

Everyone is ready to finish off the King Taijitus

Ruby as a child, reading a story about Huntsmen

Team RWBY charges in to finish the King Taijitus off 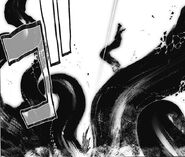 The King Taijitus as everyone attacks them

Retrieved from "https://rwby.fandom.com/wiki/Chapter_14_(2015_manga)?oldid=1044562"
Community content is available under CC-BY-SA unless otherwise noted.