The thirteenth chapter was originally free on the Viz Media site until March 10th, 2020, the chapter was locked and is now only available for members of the site.

The chapter covers are mixed and rearranged "Extracurricular" and "Burning the Candle", where after Team RWBY, Sun, and Neptune made it back to Beacon Academy, Ruby told them about Roman and the White Fang next destination, Mountain Glenn. As Ruby prepare their next mission, Yang remind her and the others about the upcoming dance, much Ruby's dismay. Meanwhile, after Jaune finished his training session with Pyrrha, he talks about the dance and how he was thinking about asking Weiss out until she already found someone to be her date for the dance, Neptune.As Jaune has some doubts to ask a girl to the dance, Pyrrha ensure him that no guys will ask her for the dance, but he doesn't think so. He joke himself a bet that if Pyrrha doesn't have a date, he will wear a dress.

In the last section, "Dance Dance Infiltration", where everyone enjoys the dance except Ruby and Jaune. When he notices why Pyrrha alone and if her date is late or not. Pyrrha reveals to Jaune that no one ask her out. She explains her past about how she came out on the top she did for the people who loved her, but each time, she becomes distant with them and no one by her side anymore. She wanted someone who doesn't know her, treat her as their partner without a second thought, and willing to be her friend. She leaves Jaune in disappointment. Later, Jaune, in a dress, asks Pyrrha for a dance together which Pyrrha happily accept and the rest of their team join in the dance.

In the middle of the night, Cinder starts her operation by sneaking in to CCT and took down several Atlas Soldiers a while her henchmen, Emerald and Mercury, who are at the dance, keeping track on the students. The chapter ends with Cinder finished the info she is looking for, she encounters Ruby, who just left the dance early and prepares to fight her with her Crescent Rose.

The Chapter 13 Japanese cover
Add a photo to this gallery 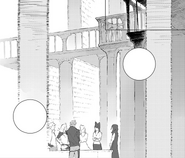 Team RWBY discussed their next mission to Sun and Neptune.

Yang reveals to her team about the Beacon Dance. 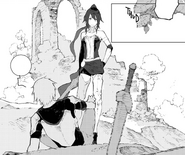 Weiss, Blake, Yang, Sun, and Neptune at the dance.

Jaune asks Pyrrha to dance with him. 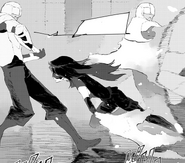 Ruby prepare to battle Cinder.
Add a photo to this gallery

Retrieved from "https://rwby.fandom.com/wiki/Chapter_13_(2018_manga)?oldid=1104684"
Community content is available under CC-BY-SA unless otherwise noted.