The chapter was originally supposed to be released on October 22nd, 2019, but it was pushed to October 29th, 2019 due to the Enthronement Ceremony 2019 in Japan, where Emperor Naruhito ascend throne in the Reiwa era.

The twelfth chapter was originally free on the Viz Media site until February 11th, 2020, the chapter was locked and is now only available for members of the site.

The chapter covers "Painting the Town...", where Team RWBY prepare to fight Roman. They use their team attacks such as Freezerburn, Ladybug, and Checkmate to damage the Atlesian Paladin. Then Team RWBY uses their combined team attack, Cannonball as their final attack. However, Roman sees through their attack and successfully turns the tide. He pins down Blake and taunts her about her past sins as a member of the White Fang and tells her that she could never be a hero. Before Roman can finish off Blake, Yang attacks him from behind with her Semblance and damages the Atlesian Paladin in order to free Blake. Now, Team RWBY use Iceflower and Bumblebee team attacks to completely destroy it. After the battle, Neo appears out of nowhere to come to Roman's aid. As Ruby attempts to stop them from escaping, but she ends up only shattering their images due to Neo's Semblance.

The Chapter 12 Japanese cover
Add a photo to this gallery 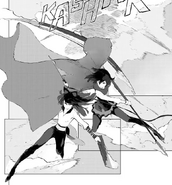 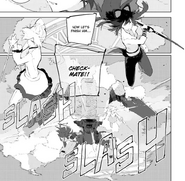 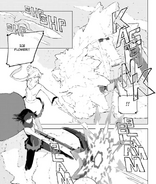 Neo arrive to save Roman 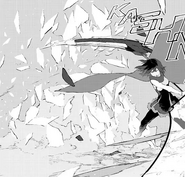 Roman and Neo disappears in a pile of glass. 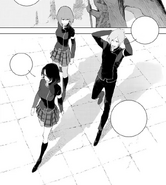 Cinder, Emerald, and Mercury arrive at Beacon Academy.
Add a photo to this gallery

Retrieved from "https://rwby.fandom.com/wiki/Chapter_12_(2018_manga)?oldid=1177870"
Community content is available under CC-BY-SA unless otherwise noted.