The twelfth chapter of the manga adaptation of RWBY was published in Shueisha's Ultra Jump December 2016 issue on November 19th, 2016.[1]

Team RWBY arrives to help Team JNPR battle the fused King Taijitu creature. Somewhere in the distance, Cardin Winchester hears the battle. Teams RWBY and JNPR find that the King Taijitus are strangely fast and their bullets and blades cannot pierce the creature's scales. Jaune Arc tells Ruby Rose about the Tentacle Grimm, before an attack from a King Taijitu head leads to him falling off a cliff in the midst of dodging. While Pyrrha Nikos catches Jaune and praises him for observation, Ruby looks at the creature more carefully and notices the Tentacle Grimm's glowing eyes in the middle of the King Taijitus. 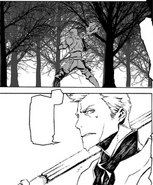 Cardin hears the fight from a distance

Blake catches Nora with her ribbon

Retrieved from "https://rwby.fandom.com/wiki/Chapter_12_(2015_manga)?oldid=1015169"
Community content is available under CC-BY-SA unless otherwise noted.