The eleventh chapter of the manga adaptation of RWBY was published in Shueisha's Ultra Jump November 2016 issue on October 19th, 2016.[1]

Team JNPR fights a group of four King Taijitu. During the battle, the King Taijitu unexpectedly merge into one, with the unidentified tentacled Grimm from the previous chapter at the center. 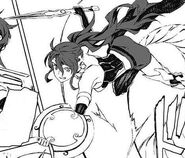 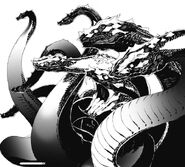 King Taijitu merge into one

Retrieved from "https://rwby.fandom.com/wiki/Chapter_11_(2015_manga)?oldid=996455"
Community content is available under CC-BY-SA unless otherwise noted.