The tenth chapter was originally free on the Viz Media site until November 26th, 2019, the chapter was locked and is now only available for members of the site. The chapter became locked after Chapter 13 was released.

The chapter starts with Yang Xiao Long entering Junior Xiong's bar with Neptune Vasilias to get info on Roman Torchwick's operation, though Neptune is concerned as to why Yang considers Junior her 'friend'.

Meanwhile, Ruby Rose and Weiss Schnee visit the CCT tower in Vale to investigate the weapons smuggling. At that point, Ruby notices a child about to be hit by a car when Penny Polendina runs in to save them, stopping the car with her bare hands while several Atlesian soldiers pursue her. Ruby decides to aide her escape.

Around the same time, Blake Belladonna and Sun Wukong infiltrate the White Fang's assembly and are shocked by the sheer amount of new recruits. They then find out that Roman is giving some sort of a presentation.

Penny tries to leave Ruby, who senses something is wrong and assures her it is okay. Penny then reveals her synthetic human nature to Ruby, who accepts her as she is.

During the assembly, Roman announces he has secured several Atlesian Paladin-290s and Blake and Sun are horrified as they realize the White Fang will not be stopped. At the same time, Roman notices the two of them and alerts the White Fang to their presence.

The Chapter 10 Japanese cover
Add a photo to this gallery 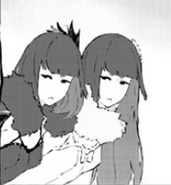 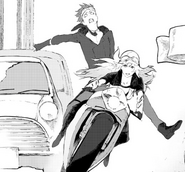 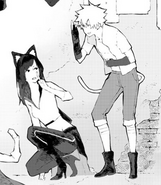 Blake and Sun's mission to infiltrate the assembly

Penny saves Ruby and the boy from being run over by a car.

Penny reveals her secret to Ruby 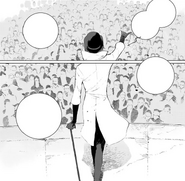 Roman gives a speech to the White Fang recruits

Retrieved from "https://rwby.fandom.com/wiki/Chapter_10_(2018_manga)?oldid=1104681"
Community content is available under CC-BY-SA unless otherwise noted.