Carmine's weapon of choice is a pair of sais with pointed prongs on each side of a wide blade. The handle of the sai can extend and connect forming a long double sided trident ending with the dagger blades on each end. The sai is mostly comprised by a silver blade and the handle is blue. Its middle is adorned with a yellow pyramid with a blue frame. Her sai are shown to be able to power themselves with Lightning Dust to add a shcoking effect onto them.[1]

In RWBY: Before the Dawn, one of her sai is turned to gold by Xanthe Rumpole, rendering it useless. Following Carmine's defeat, the other pair is claimed by Bertilak Celadon, who claims it as his own. 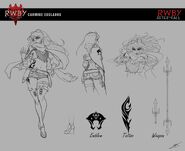 Official Design of Carmine and her weapons for RWBY: Amity Arena 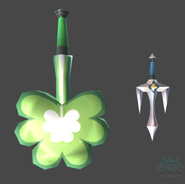 Renders of Carmine's staff and her 4-Leaf Carmine outfit weapon provided by RWBY: Amity Arena Library
Add a photo to this gallery 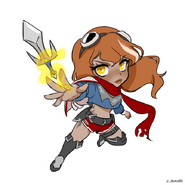 Promotional art of Carmine by _damu04 for RWBY: Amity Arena
Add a photo to this gallery


Cite error: <ref> tags exist, but no <references/> tag was found
Retrieved from "https://rwby.fandom.com/wiki/Carmine%27s_Weapons?oldid=1109243"
Community content is available under CC-BY-SA unless otherwise noted.