"Cannonball!" is the thirty-eighth episode of RWBY Chibi and the fourteenth episode of Season 2. It premiered on the Rooster Teeth website on August 12th, 2017 for FIRST members. It was reuploaded on Youtube on October 17th, 2020, together with episode 35, Movie Night.

"Cannonball" - In which Penny Polendina tries to cannonball into a pool only to end up landing on Ruby Rose.

"Winter is Coming" - In which Team RWBY spends quality time with friends and family.

"Inner Lives of Beowolves" - In which the Beowolves Mike and Marty are annoyed by a flamboyant Geist named Floyd.

Nora Valkyrie, Velvet Scarlatina, Yang Xiao Long, Jaune Arc, Sun Wukong, and Zwei are at the pool. Nora, Velvet, and Yang are relaxing in chairs while Zwei is on the life guard's station wearing sunglassed. Sun is strutting on the diving board with Jaune nearby when Penny Polendina approaches.

Penny: Hello everyone. Has anyone seen Ruby? I was supposed to meet her here exactly 36 seconds ago.

Sun turns back toward the water and makes three preparatory bounces on the diving board before jumping off.

Penny: Why is Sun punishing that wooden plank?

Penny: How do you play that?

Jaune: You just jump as high as you can off the diving board and yell "Cannonball!". Whoever makes the biggest splash wins.

Sun: Wanna give it a try?

The word seems to activate a program within Penny and she moves with energy to the diving board.

Jaune and Sun look up as Penny launches into the sky.

Ruby: Hey, have you seen Penny? I was supposed to meet her here. She's a real stickler for being on time.

Ruby: Jaune, what'd you do?

A large red targeting beam appears from the sky, marking the pool; moments later, Penny lands on top of Ruby, embedding her in the ground and knocking over everything at the pool.

Penny: Well darn, my targeting computer seems to be misaligned.

Ruby is standing next to a pond in the Beacon courtyard, and Qrow Branwen walks up to her.

Qrow: Hey there kiddo, wanna see that new monster movie? I could use a hand sneaking candy into the theater.

Yang is leaning up against the statue in the same courtyard, Taiyang Xiao Long jumps over the statue and lands next to her.

Tai: Hey Yang! How about a little sparring?

Yang: I was gonna ask you the same thing. You just, beat me to the punch.

Tai and Yang fistbump, and Yang throws her father back over the statue.

Blake Belladonna is sitting on a bench in yet another part of the Beacon courtyard. Sun lands face-first and upside-down on the tree next to her, falling to the ground on his feet.

Blake pulls out a blue library card and throws it, hitting Sun in the face.

Sun somersaults off screen and Blake stands up to follow him.

Weiss Schnee is standing next to a pillar and looking around excitedly. She gradually begins to lose energy and become sad, sighing.

Weiss turns and gasps happily. Winter is coming down a set of steps and Weiss rushes over.

Winter: A pleasure to see you, sister.

Winter: (sidestepping the hug) What have I told you about sighing in public?

Winter: And make eye contact when someone is speaking to you.

Weiss: (clasping her hands before her and bowing her head) Of course.

Winter: Now, let's review how your classes have been going. Also need you to show me your living quarters to make sure they're up to my standards. I refuse to allow my little sister to stay in any abode that is not up to code. And don't mistake my rhyming for a cheery demeanor.

Winter strides away and Weiss waits a bit before grinning.

Weiss: Oh, how I've missed her.

Atop a boulder in the forest, Cinder Fall is preaching to a group of Beowolves, while below her Emerald Sustrai, Mercury Black, Roman Torchwick and Neopolitan face toward the Grimm. Mercury, rather than paying attention, is playing on his Scroll.

Cinder: Our victory is finally at hand, my evil minions. This time my nefarious plan will succeed.

The Beowolves roar in approval.

Cinder's voice fades out while two Beowolves in the back of the crowd turn to talk to each other.

Mike: What's she going on about this time?

The two turn and walk away to a smaller boulder atop which are a coffee pot, two pink mugs, and a package of Real Chibi Beans.

Mike: (pouring himself a mug of coffee) Every day it's the same thing with that woman. And I'm just like, "Lady, I need a day off!".

Marty: (getting his mug filled) Uh, did you hear about Larry? Got dusted by that blonde with the awful puns.

Mike: No, not Larry.

They clink mugs and dump the coffee into the ground.

Coming to attention, they press their fists to their breastbones. Something catches Mike's attention.

Both Beowolves flinch as a Geist floats over.

Floyd: What is up, awesome possums?

Floyd: Why aren't you at the big meetin'? (attempting a gang gesture) The nefarious plan is insane, sooooon.

Mike: Yeah. I'm sure it's a real winner.

Marty: We were just saying our farewells to Larry. So if you don't mind...

They make get-out-of-here gestures to Floyd.

Floyd: Yeah, I heard about that. Oh hey, let me pour one out for him.

He grabs Mike's mug and promptly drops it. It smashes on the ground while Marty and Mike look on, appalled.

Floyd: You should check me out when I possess a bunch of boulders. Way bigger than you dingoes. (striking a bicep pose) All about them gains!

Mike: OK, no. We're not dingoes either.

Floyd: (floating over them and taunting) Are you sure? Because you look like a couple dingoes to me.

Mike growls and wants to leap at Floyd, but Marty holds him back by his tail.

Floyd: Ho ho ho. See you at the meeting! Don't want to brag, but I'm actually a pretty big part of the nefarious plan.

He floats away. Mike stops growling and relaxes, released by Marty.

Marty: Hey. What do you say we go and devour the flesh from some innocent humans?

Mike: Heh. You always know what to say to me, Marty. 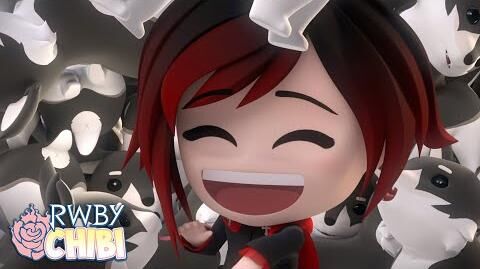 Retrieved from "https://rwby.fandom.com/wiki/Cannonball!?oldid=1134570"
Community content is available under CC-BY-SA unless otherwise noted.