"Boy Band" is the thirty-second episode of RWBY Chibi and the eighth episode of Season 2. It premiered on the Rooster Teeth website on July 1st, 2017 for FIRST members. It was reuploaded on Youtube on October 10th, 2020, together with episode 29, Girls Rock!.

"Pet Party" - In which Ruby Rose attempts to bring Zwei to the veterinarian only for Nora Valkyrie to accidentally alert Zwei and cause him to run away.

"Tai Dye" - In which Taiyang Xiao Long tries to make a pun about wearing a tie-dye shirt.

"Boy Band" - In which Sun Wukong, Neptune Vasilias, Lie Ren and Jaune Arc try to start their own band but Neptune suffers an allergic reaction to latex.

Zwei and Ruby Rose are walking down the hallways in the Beacon Academy dormitory.

Ruby: Come on Zwei, hurry up or we'll be late for the pet party!

Ruby jumps into the air smiling with her hands held out above her head. Nora Valkyrie emerges from one of the rooms and begins to follow Ruby and Zwei.

She tilts her head to the side and averts her gaze.

Ruby: It's a yearly party where Zwei can check up (winking again) on all his pet friends. And he can get a shot (winking again while leaning toward Nora and pointing dramatically at her closed eye) of fun while he's there.

She jumps into the air, mimicking Ruby's earlier pose.

Nora: Pet parties sound awesome! Ooh! Can I come? Can I? Pllleeeaaassseee?

Ruby grabs Nora by the fingertips and drags her slightly closer so she is standing behind Zwei.

Ruby: No, look, I can't say where I'm really taking him or Zwei will freak out and run away. And it takes forever to get him back.

Ruby grabs Nora's face and shakes her head slightly as she speaks.

Nora: Whyyyy, it's not like you're taking him to the vet.

Nora's final words echo as Zwei adopts a look of horror. One of his eyes twitches as the hallway begins to flicker and a high pitched noise is heard. The image glitches out and distorts before Zwei disappears accompanied by the sound of something breaking as he flees into the closest room, leaving a hole in the door. Jaune can be heard from inside the room as more crashing and breaking sounds arise.

Jaune: Zwei, wait, look out for that.

A black and white blur passes the hole in the door occasionally, as increasingly strange noises come from inside the room.

Jaune: Oh my gosh, wait, put that down!

Police sirens and an explosion are heard.

Jaune: Ah! This is insanity! Seriously, I couldn't even (incoherent)

Nora: So... What time should I come to the pet party?

Ruby facepalms. The sounds in the room die down, allowing Jaune's voice to be heard again.

Jaune: How does a dog even do these things without opposable thumbs?!

Yang Xiao Long and Ruby Rose are sitting around in a room with a coffee table. Yang is watching Team RWBY's fight against the giant Nevermore from "Players and Pieces" on her Scroll while Ruby is reading a comic book. Their father Taiyang Xiao Long leans into the room, smiling. He steps in to reveal he is wearing a bright, multicolored shirt.

He thrusts out his chest and holds his arms out to the sides, trying to draw attention to his shirt.

He rests his fists on his side and stares at his daughters. He coughs when Yang rolls her eyes.

She gestures dramatically as she speaks, before returning to reading her comic.

He crosses his arms and turns away from them with his eyes closed.

Lie Ren, Neptune Vasilias, and Sun Wukong stand in a line, wearing shiny versions of their normal clothes and sporting frosted tips in their hair. The pink lock of Ren's hair has been partially dyed green.

Neptune: Alright, if the girls are gonna have a band, then we should too.

As he speaks, Sun and Neptune both pose.

Ren: Why did I agree to this?

He hangs his arms and head in shame.

Neptune: Because you love the sacred art known as dance.

Ren: (placing a hand on his chest) With all my heart.

Jaune walks up to Ren, Neptune, and Sun wearing white face paint with black diamonds around his eyes.

Jaune: What up my juggledudes?

Sun: What are you doing?

Jaune: What, this? Oh, Neptune said to dress up as cool as I could.

Jaune crouches down and forms the I Love You sign from American Sign Language with both hands, presumably mistaking it for the devil horns rock gesture.

Sun: Yeah? So what are you doing?

Jaune: Wha- this is totally cool. Like that classic rock band, Smooch! Or, for the younger generation; the Lunatic Jester Brigade. If you, like, terrible music.

Ren: Ugh, alright, this is getting too weird for me. I'm out.

He prepares to run away, only to be stopped by Neptune grabbing his foot.

Neptune: Ren! Please don't go! Everyone knows you're the best at dancing in the whole school and if you don't choreograph the best dance then we'll never win the battle of the bands and be the coolest kids in the school!

Neptune picks up Ren, who stands perfectly still and looks startled, and sets him closer to Sun. He walks up to Jaune and puts his left hand on his face.

Neptune: Jaune, about the makeup. (suddenly concerned) Is this, uh- latex-based?

Jaune: How badly? Can you still dance?

Neptune: By nightfall I won't be able to move.

Ren: Is there anything we can do?

Neptune's head doubles its normal size and the rest of his body turns red and swollen.

Neptune: Remember me, as I was.

Ruby tries to give hints to Nora about Zwei's visit to the veterinarian.

Nora unknowingly mentions the word vet in front of Zwei.

They get the joke...

Neptune bloated after an allergic reaction.
Add a photo to this gallery 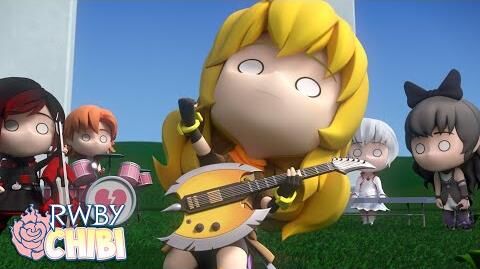 Retrieved from "https://rwby.fandom.com/wiki/Boy_Band?oldid=1133466"
Community content is available under CC-BY-SA unless otherwise noted.