Blake and Sun vs. Roman and White Fang

"Blake and Sun vs. Roman and White Fang" was a battle that occurred at the Vale Port during "Black and White", where Blake Belladonna and Sun Wukong attempt to stop Roman Torchwick and the White Fang from stealing a large Schnee Dust Company Dust shipment.

The day before fight occurs, Blake and Sun discuss whether or not White Fang are behind the recent surge of Dust robberies.

They decide that the best way to find out whether the White Fang are truly behind these events is to go somewhere that has a high likelihood of being robbed and see if the White Fang turn up or not. As Sun has heard that a large shipment of Dust has recently arrived, they decide to go there and observe.

After monitoring the Port for a period of time, they discover that the White Fang are genuinely behind it. However, the appearance of Roman alongside the White Fang confuses Blake as she believes the White Fang would never work with a Human.

Blake then sneaks up behind Roman, taking him hostage and revealing herself to be a Faunus, thus causing the White Fang members to hesitate. While holding Roman hostage, Blake demands an explanation to what is going on and why.

While Blake is interrogating Roman, two Bullheads fly past, distracting her long enough for Roman to fire Melodic Cudgel at the ground near her feet, creating an explosion which allows him to escape. Blake, dazed but unhurt, quickly rolls away and runs to take cover behind some containers as Roman fires several more shots at her.

Roman is interrupted when a banana peel lands on his head, causing him to look up just as Sun leaps down from the container and drops down feet-first onto his face. Sun then leaps off, finishes the roll, and demands that Roman leave Blake alone. Above the two of them, the Bullheads open their doors, allowing several White Fang members to jump down and surround Sun.

With an insult from Roman at Sun, the White Fang Goons charge at Sun. As the first one reaches Sun, he punches him away and dodges between several others, punching and kicking them away, and finally rolling away.

As Sun rolls away, he pulls out Ruyi Bang and Jingu Bang, which he uses to beat down on several opponents that near him, then slams it down onto the ground, causing massive red shockwave that knocks most of the White Fang members down.

As Blake looks around the corner at the fight, Sun finishes off his final opponent, knocking them towards Roman, who leans out of the way and aims his cane at Sun, firing a shot that Sun blocks with a spin of his staff. Blake then leaps into the action, declaring that the fight is hers.

Blake and Roman swing their weapons at each other, but both parties block every strike. Soon, Blake backflips into the air and produces a clone, which propels her past Roman. As she flies past him, she finally lands a hit, so she uses clones three more times. However, on the third time, Roman swings his cane to block and strike her. Right before the strike connects, Blake produces a clone, which takes the hit and pushes her into a backflip. As she begins to turn upright in the air, Roman swings at her again, but she blocks with her katana and lands on her feet.

Roman moves in close and attempts to punch Blake in the face, but she produces another clone just before it connects. The clone takes the hit and is sent flying backwards while Blake does a back-handspring. As soon as she is back on her feet, she slashes at Roman again, but once again, her attacks are blocked. Then, she swings her katana at Roman, but he hooks the blade with his cane, trapping it. As she tries to pull it free, she leaves an opening for him to hit her in the side. As she is recovering, he swings his cane upward, striking her in the chin hard enough to cause her to lean back. While Blake straightens her posture, he laughs, spins around, and slams his cane into the side of her face, causing her to turn around 180 degrees. She stumbles and turns around to strike back, only to be hit once again and knocked to the ground.

Without missing a beat, Sun leaps in between Roman and Blake and disconnects his staff into two shotgun nunchucks, which he uses to swing at Roman, firing them as they spin. However, despite with the rapid rate of fire, Roman manages to deflect them all, laughing once again. Suddenly, Blake comes back into the fight from behind Sun and hits Roman hard enough to knock him backward onto his back.

On the ground, Roman notices a container hanging from a crane right above the two Faunus and creates a distraction by firing his cane at the cable, thus causing the crate to drop down onto them. Blake leaps behind it, but Sun jumps forward, ending up right below the muzzle of Roman's cane. However, before the fight can continue, their attention is diverted when Ruby Rose calls out to Roman from a nearby rooftop. 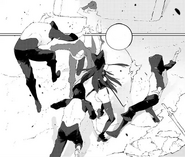 Add a photo to this gallery
Retrieved from "https://rwby.fandom.com/wiki/Blake_and_Sun_vs._Roman_and_White_Fang?oldid=1103230"
Community content is available under CC-BY-SA unless otherwise noted.