Blake Belladonna alludes to Belle and The Beast from the fairy tale Beauty and the Beast, which follows Team RWBY's theme of fairy tale allusions. This allusion has had the following influences on the character and the show:

Blake's emblem is a stylized depiction of a belladonna flower. This emblem appears on some of Blake's possessions:

Volume 2 Production Diary 2 shows a piece of early Blake concept art, by Einlee, that looks quite different from the final version of her original battle outfit's design. She is wearing a black coat with the collar open and a black strap across the chest. The bottom opens above the belly button, splitting off to the sides. The back of her coat reaches almost to the back of her knees. Underneath the coat, she is wearing a pair of very short white shorts, the waist of which may extend above the belly button.

A gold-colored ring with pointed extensions can be seen on her right upper thigh, and a piece of gold-colored armor is present on her right shoulder and upper arm, underneath which is white bandages. She is wearing a black, fingerless glove with gold trim on her right hand and a longer version of the glove on her left hand. She wears thigh-high, heeled gray boots that appear to have a strap on the outer side connecting up to her shorts. The black laces on her boots start near her toes and extend all the way up. An early version of her belladonna flower emblem is visible on the outer side of her right boot, near the top. The soles of her boots appear to be red.

Her physical appearance has the following two differences:

She appears to be dual wielding a pair of short bladed weapons.

Another piece of concept art by Einlee resembles the final version more closely, with the following differences: 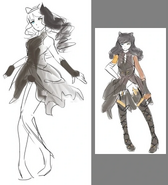 The original storyboard for the Volume 1 Opening

The Maya Blake model in Volume 4