Beacon Cliff is a location near Beacon Academy. It first appears in "The First Step" overlooking the Emerald Forest. There are what appear to be launch pads with the Beacon Academy emblem on them.

Beacon Cliff is the starting point for Beacon Academy's initiation. While everyone prepares to start, Ozpin explains that they will be launched into the forest and find partners in order to make it to a temple and retrieve a relic.

From there, the students were launched one at a time from the cliff and were told to use their own landing strategies, while Jaune Arc was unceremoniously launched into the forest while questioning what a landing strategy was.

Beacon Cliff is seen again in "The Emerald Forest, Pt.2", where Ozpin and Glynda Goodwitch are discussing the last pair of students being formed (Lie Ren and Nora Valkyrie).

The cliffs are seen for a final time, when Ozpin becomes intrigued by Ruby Rose and Weiss Schnee's interactions in the forest. 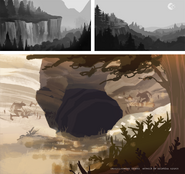 A shot of the Beacon candidates on the launch pads.

A wide shot.
Add a photo to this gallery

Ozpin standing in front of the cliffs.
Add a photo to this gallery

Retrieved from "https://rwby.fandom.com/wiki/Beacon_Cliff?oldid=1102328"
Community content is available under CC-BY-SA unless otherwise noted.