The Beacon Academy Initiation, also known as the cadet trial, is a process that all first-year students go through upon arrival at Beacon Academy.

Instructors grade the students for the duration of the initiation but do not intervene in any way.

In "The First Step", the new students alongside Professor Ozpin and Glynda Goodwitch arrive at Beacon Cliff for the first part of their test. Ozpin mentions the dangers and possibility of death during the initiation, advising the students not to hesitate to destroy everything in their path to success. It is also explained that, once in the Emerald Forest, their partner for the next four years would be the first person they make eye contact with.

They will then head north to an abandoned temple to find and return one of the relics. These relics are newly chosen by the headmaster himself for the test each year. (In the year Team RWBY partook, the relics were chess pieces.) It was also stated that the students would be watched by staff members, but that those watching them would not help because their job is simply to observe.

The students were then launched one at a time into the Emerald Forest, using their own landing strategy to land safely (except Jaune Arc, who was saved by Pyrrha Nikos). Upon landing in the forest, each student eventually found a partner either on purpose or by accident and the duos started making their way to the temple. Along the way, the students were faced with attacks from different types of Grimm all over the forest. While some managed to beat their enemies, others failed and were forced to retreat.

Through the initiation, the students are put into teams comprised of four students each, who are formed based on the two pairs that took the same relics, such as Team RWBY, with both pairs taking the white knight piece.

Additionally, most students watch the initiation and have a tendency to judge new teams based on how they do in the challenge. For example, Team RWBY and Team CFVY both gained the reputation of being hotshots due to their achievements and dynamic in their respective initiations.

At the conclusion of Initiation, Ozpin announces each team based on the relic they retrieved. He names and appoints a leader to each team.

Teams of two are required to recover these relics and return them to the Beacon Cliff in order to complete the initiation. The students are watched and graded on their performance along the way, but the professors will not interfere.

Relics are chosen by Professor Ozpin every year and therefore vary from year to year. The relics that Ozpin chose on the year that Ruby and the others arrived were black and gold chess pieces, albeit with only one pair of pawns in each color.

The relics of Team CFVY's first year were small stone tablets with playing card symbols etched onto them. Fox got the King of Hearts whilst Velvet took the Queen of Hearts.[1]

Blake Belladonna and Yang Xiao Long found the temple in "The Emerald Forest, Pt.2" and discovered that the relics were black and gold chess pieces on twenty pedestals. However, three of the pieces, the black bishops and a gold pawn, were missing, signifying that other teams had made it before them.

Yang whimsically decided on a "cute little pony", choosing the white knight as their relic.

After Nora Valkyrie arrives with Lie Ren at the temple in "Players and Pieces", she quickly snatches up the white rook, placing it on her head and declaring herself to be "Queen of the Castle". Jaune, Pyrrha, Ruby and Weiss Schnee also arrive, with a Nevermore and Death Stalker pursuing both pairs. Since completing the mission only requires each pair to return to the cliff with one relic, they decide to grab the relics and run. Prior to leaving, Ruby chooses the second white knight and Jaune picks the second white rook.

This choice of pieces later turns out to be the key to sorting the pairs, which were formed on a first eye-contact basis, into teams of four that are created through combining the two pairs that have matching relics.

Yang and Blake inspecting the relics.

A Black King relic at the abandoned temple.

Jaune and Ruby choose the other White Rook and White Knight relics respectively. 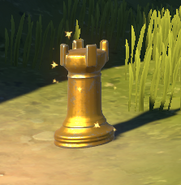