For the other uses of "Atlas", see Atlas (disambiguation).

Atlas, formerly known as Mantle, is one of the four Kingdoms of Remnant. It is located in Solitas, the far northern continent of Remnant.[1][2]

The Huntsman Academy of Atlas is known as Atlas Academy.[3] Unlike most Kingdoms, Atlas' government, military and the Academy function as a single entity. It is also the location of the Schnee Dust Company headquarters.

The notable cities of the Kingdom are its capital, Atlas, and the former capital, Mantle.

Atlas is the primary setting for Volumes 7 and 8.

Early settlers came to the icy continent of Solitas in order to begin a new civilization. Its harsh climates and great mountain ranges helped to suppress the threat of the Grimm, but it also proved difficult for the population to grow. Humanity adapted, however, by using Dust in tandem with advanced technology, developed out of necessity and at faster progression than the rest of the world, creating what came to be known then as the Kingdom of Mantle. Their advancements in Dust application allowed Mantle to expand and devote more territory to mining and research, including the area beside the Kingdom's combat school, Alsius Academy.

Around eighty years before the beginning of the series, a massive ten-year conflict known as the Great War came to an end. In this war, Mantle and Mistral fought Vale and Vacuo. Prior to the war, Mantle formed an alliance with Mistral. The two traded frequently, and Mantle taught Mistral how to form settlements in the snowy northern region of Anima.

After an incident with the Grimm, Mantle came to the conclusion that, if it controlled its citizens' emotions through the abolishment of the arts and self-expression, it would become safer from Grimm. Rather than lose the alliance, Mistral did the same, to an extent. This added to the list of things Vale disliked about Mantle and Mistral, among which was the treatment of their own citizens, their use of slavery and their insistence that their way of life was what was best for everyone.

Eventually, Mistral entered a conflict with Vale, after a riot between settlers from the two devolved into the first battle of the Great War. Mantle rushed to their ally's aid, and together, they fought Vale on both Sanus and Anima soil. Having established a presence in Vacuo, the two allied Kingdoms were able to keep Vacuo out of the conflict, and some time into the war, they began pressuring the desert Kingdom to join the war on their side. Fearing that they would conquer Vacuo, should Vale fall, the citizens of Vacuo pushed Mantle and Mistral out of their territory and allied themselves with Vale.

Grimm attacks increased worldwide and as a result, Mantle lost many of its settlements to the creatures, some of which were never reclaimed.

During the war, Mantle accelerated the pace of its technological innovation, developing new weapons and applications of Dust, giving them an edge during the conflict. Large tracts of land were set aside for Dust mining and research. The Kingdom was also home to at least one combat school, Alsius, located to the northeast of the main settlement. The territory surrounding Alsius was used as a research and development facility during the war.

The Great War finally came to an end with the deadliest battle in the war's history. Mantle and Mistral attempted to take Vacuo's Dust mines to cut off their enemy's supply. There, they were met with the King of Vale personally leading his army alongside Vacuo. It is said that he laid waste to countless men, but historians claim that this feat was aided by the unusually violent weather and Mantle's inexperience in desert combat.

With the war over, the leaders of the four Kingdoms gathered on neutral ground on Vytal to form a treaty and plan the future of Remnant. There, the four Kingdoms' governments were restructured, their territories were redistributed, slavery was abolished, the tradition of the Vytal Festival was begun and the King of Vale founded the four Huntsman Academies.

Alsius was reopened under the name Atlas Academy and was secretly given a Relic to safeguard. As a gift to the world, Atlas invented the Cross Continental Transmit System and had the towers for it built on each Huntsman Academy's campus, thus allowing all four Kingdoms to communicate. In an attempt to give back to its citizens, Mantle applied many of the techniques and technologies used in the war to enhance the Huntsman Academy's campus, expanding the school grounds and even securing the surrounding areas. Along with the eventual establishment and merging of the military and research facilities with the government and schools, the original capital of Mantle was overshadowed. The decision was made to move the capital to Atlas, and the Kingdom as a whole was also accordingly renamed to Atlas. Around this time, an incarnation of Ozma suggested to use the Relic of Creation to raise Atlas off the ground. By the present day, the public story for Atlas being kept afloat is due to Gravity Dust.

The former capital of Mantle appears to have subsequently fallen on hard times, as alluded to in Word of Remnant: Atlas. During the charity concert in "Tipping Point", guests are heard conversing with Jacques Schnee about the economic disparity between the cities of Atlas and Mantle. At the same time, they discuss Faunus-Human relations; it is implied that a significant portion of Faunus live in the poorer city of Mantle, and are economically disadvantaged themselves. Those that moved to the city of Atlas were "promised jobs" by the Schnee Dust Company amongst others, though it is implied that this is not working out as well as the immigrants would have hoped.

During the 40th Vytal Festival, the hosting Kingdom, Vale, is attacked and Beacon Academy and its Cross Continental Transmit tower was destroyed, cutting off Atlas' communication with the other three Kingdoms. The festival's live broadcast and Atlas' robots were hijacked by the attackers, who made it appear as though Atlas attacked innocent civilians. Beacon became overrun with Grimm, and the presence of a petrified Wyvern drew in even more Grimm. Atlas officials searched for a solution, but with Vale making slow progress to retake the academy even after several months, they were not optimistic.

During the several months between the end of Volume 3 and beginning of Volume 4, the Atlesian council voted to place an embargo on Dust exports, in an attempt to prevent conflict, due to the other Kingdoms believing Atlas attacked Vale. This embargo continued into the events of Volumes 4 through 7.

The Kingdom is known for its innovation and far-reaching technological achievements, having developed, and then gifted the Cross Continental Transmit System to the rest of the world after the Great War, allowing for communication between the four Kingdoms.

Atlas is also a primary producer of Dust, and the Schnee Dust Company's main headquarters is located in the Kingdom.

Other technological advances spearheaded by the Kingdom of Atlas include great strides in the field of robotics. Robots built for combat include the Atlesian Knight-130, supplied by Atlas to the rest of Remnant for several years. Penny Polendina, the first artificial being capable of producing Aura, was also built with assistance from the Atlesian Military, as revealed in "Painting the Town...".

However, some of the Kingdom's scientific research into the nature and composition Aura takes it into more morally questionable areas. Their research has yielded experimental technology that is capable of "capturing" Aura from a person and transferring it to something or someone else. The existence of this technology is highly classified, but many of those who do know of it see it as unnatural and wrong. Regardless, this technology may play a key part in preventing the power of the Maidens from falling into the wrong hands, or could work in the completely opposite manner.

Similar to Lake Matsu's floating islands in Mistral, Atlas uses Dust to keep itself floating high above the ground, tethered to the soil by a series of cables. However, this is just the public story. In reality, Atlas is kept afloat using the Relic of Creation hidden under Atlas Academy.

Like the other Kingdoms, Atlas is governed by a council consisting of five seats. General James Ironwood holds two of the seats, one of them by virtue of being appointed head of Atlas Academy. Ironwood is said to have amassed even more sway over the council by virtue of other representatives becoming afraid after the Fall of Beacon.

At least some positions on the council are filled through a competitive electoral process. Volume 7 presented an election in which two primary candidates and two minor candidates ran against each other for a seat. There are also campaign posters put up throughout the city of Mantle.

Jacques was later revealed as one of the candidates in the election, running based on Ironwood's presumed amassed power and abuse of his authority in implementing the dust embargo that has damaged the dust trade in Atlas, specifically to the Schnee Dust Company.

The other major candidate, Robyn Hill, has been advocating the betterment of the kingdom's former capital's social and economic conditions in comparison to its new capital, Atlas. This stance earned her the support of many of the kingdom's citizens. The minor candidates for the election were Ivy Brown and Pearl Wistier.

It has been implied Robyn is an active rival against both Jacques and Ironwood. The first due to him also running for the council seat and for his deplorable business methods, worsening Mantle's economic state, and the second for his implementation of the Dust Embargo, which had worsened the already poor living conditions of Mantle, and his diverting the majority of the kingdom's resources to his "Secret Pet Project" that has left Mantle particularly vulnerable to attack from Grimm without revealing the reason why Mantle was being denied aid.

Voters use an electronic system where they can select their favored candidate by tapping on a box with that candidate's name. Due to it being electronic, the system is vulnerable to hacking, a fact exploited by Arthur Watts in order to rig the election in favor of Jacques.

Councilmembers Camilla and Sleet are the other members of the council. While members of the council are routinely informed of certain efforts undertaken by the military, Ironwood is allowed to withhold certain information as indicated by him concealing the details about the Amity Communications Tower project. They are also allowed to withhold details about ongoing investigations. However, the council provides apparent checks on the power Ironwood wields. Their exact means of keeping the military's authority in check has not been revealed.

At the end of Volume 7, Ironwood announces his intentions to declare martial law due to the impending arrival of Salem. Ironwood claims by doing this the Council will be unable to countermand his decision to place Atlas into orbit to protect the Kingdom from attack, suggesting martial law grants him nearly or completely unchecked authority.

With their headquarters located at Atlas Academy, the Kingdom's armed forces are made up of an organized body known as the Atlesian military, which is regarded as the world's strongest military power. Human soldiers are seen wearing a uniform that includes metal body armor and helmets that conceal the top of their faces. They are seen wielding a variety of weapons including rifles, pistols and swords.

The Kingdom's forces were also referenced in "Welcome to Beacon", depicted as a playable force in the tabletop, Remnant: The Game. One of the units mentioned in the game is the Atlesian air-fleet. Yang Xiao Long also comments that most of the Atlesian troops are "probably androids".

Atlas' location within Remnant, to the north of Vale
Add a photo to this gallery

Ironwood with students of Atlas academy, military personnel, and Penny

A large number of Atlesian aircraft

The founding of Atlas Academy in Mantle 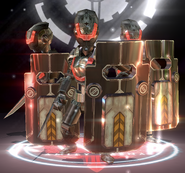 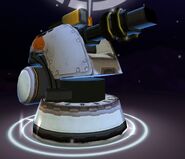 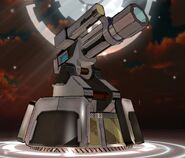 Atlesian Burrow Gun
Add a photo to this gallery