For the other uses of "Atlas", see Atlas.

Atlas was the capital and largest city in the former Kingdom of Atlas. It sat on a floating island above the City of Mantle, the former capital of the Kingdom and was the location of Atlas Academy.

Following the removal and usage of the Relic of Creation from its Vault, the island plummeted and crashed into Mantle, destroying both cities. At least thousands of its population were transported to Vacuo beforehand, using the Staff to create a pathway.[1]

Atlas was a large metropolitan city in the Kingdom of Atlas, sitting atop a floating island above the city of Mantle. The city was extremely advanced, with many towers and skyscrapers of all sizes being visible at a distance, all seemingly with a blue color scheme to them. Atlas was seen as having platforms on the underside of the floating island and Atlas Academy was situated at the center of the city. There was a massive hill to one side of the city, atop of which Schnee Manor used to reside.[2]

To the bottom of the floating city, the district of Old Mantle was seen above a massive, crescent-shaped airport. Farmlands were seen to either side of Old Mantle.[2]

The entire city was surrounded by a Hard-Light barrier that was projected by forked spires stationed around the perimeter of the floating island. However, if one of the towers was disabled then the whole barrier would be disabled.

Additionally, large train rails in the form of rings circling around allowed for mass public transportation. The tracks were projected by large towers, using Hard-Light Dust.[3]

Underneath the city located around the "Donut" was the command center for the Atlas Military. 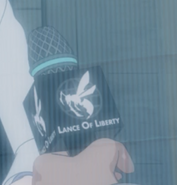 The Lance of Liberty 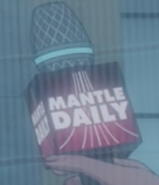 Atlas was built atop a large, flat island with a range of mountains on the north-most "coast" of the landmass, in addition to a singular mountain rising at its center. Large generators surrounded the island, allowing it to be protected by Hard-light Dust shields.

In "War", the city's shield generators were destroyed by Salem and as such the island was made unsafe from the Grimm.

The majority of the city's island was composed of large residential areas and businesses, whose architecture took large inspiration from a blend of art deco and neo-classical elements, as well as the Kingdom's highly advanced technology. The city was shown to have various subway systems, making transport in the island extremely efficient.

While undercover after having infiltrated the Kingdom, Cinder Fall and Neopolitan used a high life apartment to bide their time in search of the Relic of Knowledge and the Winter Maiden.

One notable business in Atlas was the Glass Unicorn, a hotel where a young Cinder was raised and put to work after being taken in from an orphanage in Mistral. It was managed by the Madame and her daughters before their deaths.

The city was also home to the Schnee Dust Company headquarters, a corporation owned by the Schnee family, and was one of the largest producers and exporters of Dust in the world.

Atlas Academy was positioned atop the island's center mountain, overlooking the city. There, it doubled as both the Kingdom's academy and General Ironwood's military center, situated directly below Atlas Academy at the city's "Donut", where various facilities were hosted.

For easy access within its borders, the city used a subway system as public transport. As revealed in concept art, there were a total of four different subway lines within Atlas.

Resting on one of Atlas' mountain ranges, the residence of the Schnee family was hoisted over a hill, overlooking the city in a similar manner to the kingdom's Huntsman academy.

The east and west sides of Atlas Islands were kept flat and a large portion of it was reserved for expansive fields for food production and farming.

In "Midnight", Atlas' western production field was crushed by Monstra. Later in "War", the fields were overrun by Grimm like Sabyrs.

Directly under Atlas, in the center of the floating landmass, the military kept various facilities in a spiral connected to the city's anchors. Affectionately nicknamed "The Donut", this was where Fria was kept in the Atlas Medical Facility, officially known as the "M3" (or Maiden Medical Tower 3).[4] Landing bays were seen within the Donut.

At the base of the Donut, the Atlas Command Center was situated next to the transport tubes from Mantle. Nearby was also the bottom opening to the Atlas Vault.

Military personnel in the Command Center

According to Atlas concept art the front part of Atlas, closest to Mantle was called Old Mantle and was also the main airport of Atlas. The airport was shaped similarly to a crescent moon.

The Glass Unicorn, a notable hotel in Atlas.

The Schnee Training Room (unofficial) was a location somewhere in Atlas where Weiss was forced to fight the Arma Gigas.

Atlas had a subway system. It was used for shelter during Salem's attack by the citizens of Atlas.

Following the Great War, the people of Mantle needed a new symbol of hope, which the city of Atlas provided. Soon, Atlas cast a shadow over Mantle, becoming the face of its Kingdom. This also became more literal, when an incarnation of Ozma used the Relic of Creation to raise Atlas off the ground. By the current time, the public story for Atlas being kept afloat is due to Gravity Dust.

Once Ironwood learned that Ruby Rose and her friends lied to him and that Salem was on her way in "Gravity", he changed his original goal from launching Amity Communications Tower into the atmosphere to keeping the Relic of Creation, along with the Relic of Knowledge and the Winter Maiden out of Salem's reach. To achieve this, he planned on ending the life of the current Winter maiden and having her powers to go to Winter Schnee so they can open the Vault and use the Relic to raise the City of Atlas into the atmosphere. When Team RWBY realized that this would mean abandoning Mantle to die, they opposed him, leading him to put out arrest warrants for them and their friends.

Later in "Midnight", Atlas is attacked by a river of Grimm Liquid that shoots up underneath it and creates Centinel Grimm. These Grimm attack the Hard-Light Dust shields around the floating island and destroy the shield, allowing Salem and her Monstra Grimm to begin the Battle of Atlas. The Military fights off the invasion and plans to destroy the Monstra with a bomb, but Winter allows Yang's Group to rescue Oscar Pine and they manage to destroy the giant Grimm before the Military even has a chance to use the bomb.

In "Creation", the city began to plummet when Team RWBY used the Staff to create a new body for Penny Polendina. Later in "The Final Word", Atlas crashes into Mantle, causing them both to be destroyed. The melting glaciers nearby flood the cities and submerge them underwater.