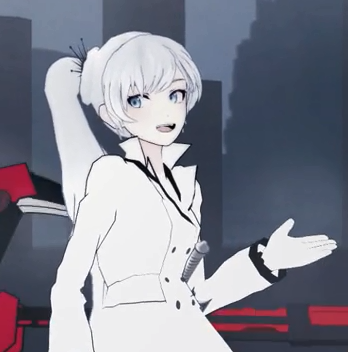 Which one? Her left elbow is partly hidden my Myternaster's hilt guard. Besides, Monty's art style is generally to make the girls' limbs quite skinny and 'stick figure'-like.

If Yang doesn't say that some time in the future, I'll be deeply surprised. I'm also expecting Ruby to kick ass at some point and Yang to remark: "Well, looks like Sis Rose to the occasion!" There will be a dead pause before Weiss, with a weird look on her face, replies: "Yes, she did. Why are you acting as if you expect us to do or say something?"

Hue hue, trying indeed; that's the reason why I grow to like her in the first place. On a second note, that has to be one of the cutest Weiss moments of the show. That tiger tooth is so cuuuuuuuuuute!

(edited by Zolnir)
0
Rose to the occasion...you get like 120 points. Good job.
(edited by A Fandom user)

What do you think?